My family have been weavers for generations,

except my aunt who was a storyteller

and her voice was silenced.

I will teach my daughter about them

I will make her clothes as yellow as the Sun—

so she will learn that her happiness depends on herself and does not need an external source;

a skirt as orange as fire—

so she can turn into a fiery ball of fire that tramples anyone who dares stand in her way;

a dress as blue as the waters of the Nile—

so she learns to be free and not be contained in one place;

rooted the way the house and the meadows couldn’t be,

bombed by militants and reduced to ashes

the grey of which has dropped into my daughter’s eyes;

and were my mother’s favourite flowers—

so she can spread beauty in this parched world

in case she’s watching over us from above.

who died in police custody

who only wanted to see her country free

and died before she could witness it.

I will teach my daughter the sacrifices

I will stitch my dreams and hopes and aspirations for her and this country,

into this fabric of love.

My daughter will wear it with pride

knowing that she is wearing the history of her family

and of her country. 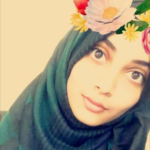